How effective communication and implementation of schemes can have impact on Scheme’s ROI.

With an idea of bringing world class quality and superior milk products to Indian homes Pioneering – Ventures conceptualized India’s first industrial-scale collection and distribution platform for high quality milk- “MilkLane”. With that as vision, they started focusing and collecting consistent quality of milk, which is safe from toxin and antibiotics with no adulterants and preservatives. With this idea, they started offering, high quality UHT milk in convenient 500 ml and 175 ml and made from the same milk is their latest offerings 500 gm MilkLane curd.

Effective communication and implementation of schemes to have an impact on Scheme’s ROI.

Why Schemes Communication was a Challenge?

Schemes launched by the company is not communicated effectively till the retailer since most of the schemes get limited only till the channel partner’s end and eventually creates unawareness among the retailer’s on the scheme information. In general, the trade scheme information reaches to less than 50% of the targeted retailers. For even most organised companies, there is no guarantee on the exact number of stores since end beneficiaries are unknown in number.

Most of the trade scheme application happens at the distributor end during the dispatch process rather than at the time of order taking hence the retailer lacks the motivation to place an order above average order bill value and the scope of improvisation on range selling is not met.

Also, due to this, the company lacks any validation process to verify distributor’s claim as well. And in most of the cases, it become too much time consuming for the account team to settle the claims.

Business impact due to ineffective communication and implementation of schemes

Lack of retailer motivation in selling scheme based SKUs and hence this leads to lesser market reach of the products at the target segment.

To avoid the situation of stock out, which generally happens during any festive seasons like Holi, Diwali, company over produces some the SKUs having lesser shelf life. For Example: Milk Industry, where the sale of dairy products shoot up drastically during festive season. In case the Sales target is not met, the company plans to launch schemes of these products post the festive season. In such scenario’s ineffective communication and implementation of trade schemes leads to dumping of products having lesser shelf life.

At the end, the company fails to achieve the Return on Investment (ROI) on the launched scheme model.

How SalesDiary ensured effective communication and implementation of schemes and claim settlement. 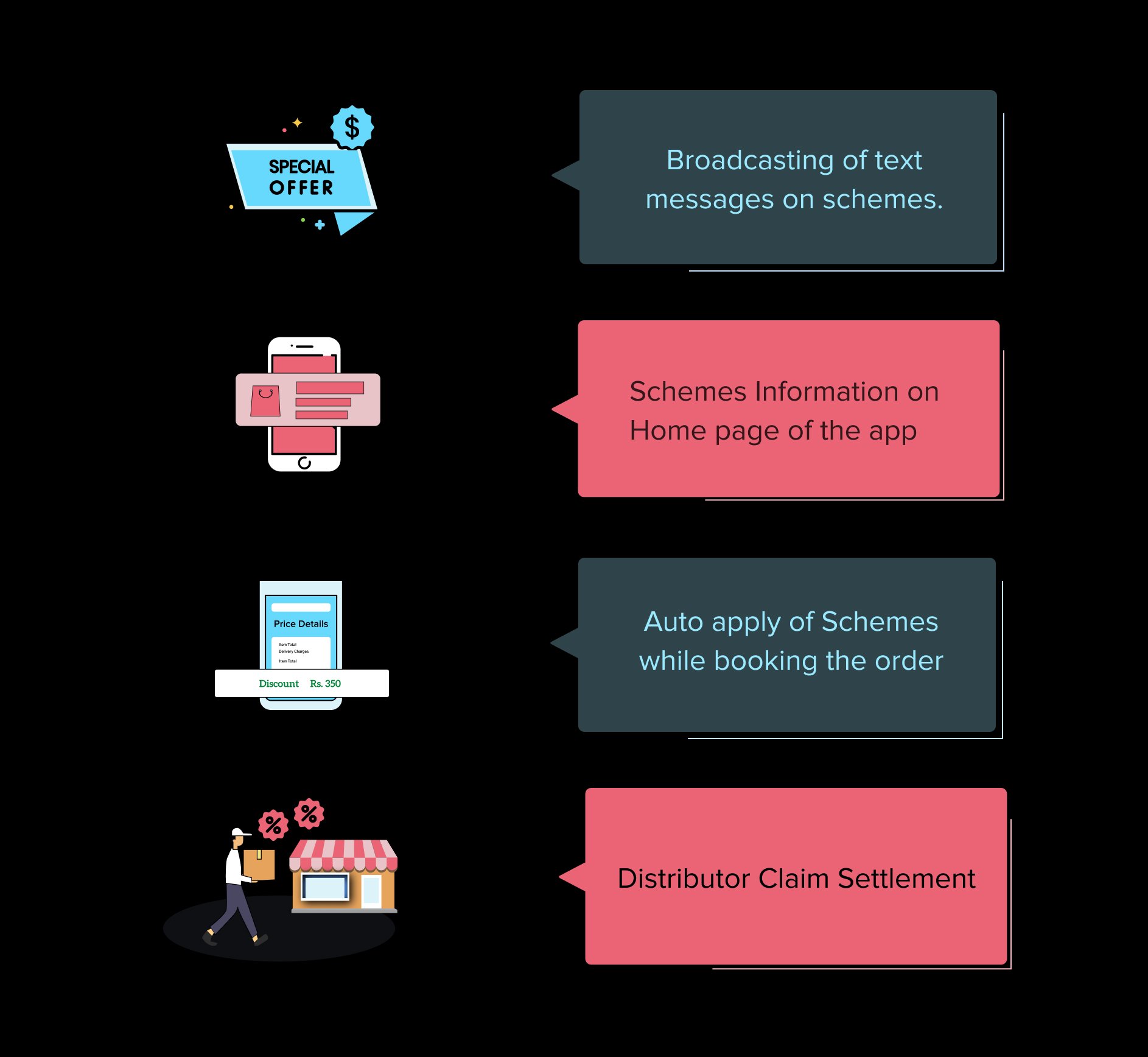 1. Broadcasting of text messages on schemes

SalesDiary enables broadcasting of text messages on schemes to the retailers- This feature enables the scheme information to reach out to retailers instead getting limited only till the distributor’s end. 2. Schemes Information on Home page of the app

SalesDiary enables broadcasting of text messages on schemes to the retailers. This feature enables the scheme information to reach out to retailers instead getting limited only till the distributor’s end. 3. Auto apply of Schemes while booking the order

Scheme (QPS &VPS) configured at the backend enabled the Scheme to be auto applied while booking the order- This solves the major problem where the schemes application happens while order taking rather than happening at the distributor end while dispatch process. This leads to increase in range selling and average order bill value. Also helps to push the SKUs which has lesser shelf life in the market. (Caused may be of over production during festive seasons.

Distributor Claim settlement became hassle free and lesser time consuming as the scheme sales data turned out to be handy.